Monthly donations are the lifeblood of Depressionforums.org. A small, monthly $2-$5 donation will help DF keep our mission and vision alive. Founded in 2001, our organization’s ongoing mission is to continue to fight the stigma of mental illness, encourage, inform, and inspire the public about mental health.

In cabaret shows and musicals such as My Beautiful Black Dog,

performers at the fringe are breaking the taboo of mental health

As a nation, the UK has never excelled at talking about its own state of mind. From discussions about depression to frank admissions of unhappiness, such matters have mostly remained taboo in favour of maintaining that very British stiff upper lip.

However, at this year’s Edinburgh festival fringe, mental health has emerged as an unexpected theme, with performers and comedians increasingly creating and championing pieces that break through the stigma. 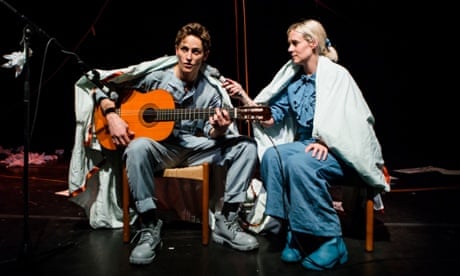 As is reflective of the breadth of the fringe itself, these ideas and issues around mental health are being presented in pieces spanning standup and musicals to monologues and dramatic lectures. Already grabbing headlines is Fake It ’Til You Make It, a show created by comedian Bryony Kimmings and advertising executive Tim Grayburn.

In cabaret shows and musicals such as My Beautiful Black Dog,

performers at the fringe are breaking the taboo of mental health

As a nation, the UK has never excelled at talking about its own state of mind. From discussions about depression to frank admissions of unhappiness, such matters have mostly remained taboo in favour of maintaining that very British stiff upper lip.

However, at this year’s Edinburgh festival fringe, mental health has emerged as an unexpected theme, with performers and comedians increasingly creating and championing pieces that break through the stigma.

As is reflective of the breadth of the fringe itself, these ideas and issues around mental health are being presented in pieces spanning standup and musicals to monologues and dramatic lectures. Already grabbing headlines is Fake It ’Til You Make It, a show created by comedian Bryony Kimmings and advertising executive Tim Grayburn.

It puts forward a frank discussion of Grayburn’s own depression and nervous breakdown after he came off antidepressants. The couple were prompted to write it after the suicide of Robin Williams last year, driven by a desire to remove the shame attached to mental health.

It was a similar experience of depression and alienation that drove Brigitte Aphrodite, 32, to write My Beautiful Black Dog, a piece of theatre-cum-musical that explores her battle with anxiety and mental health and how it warped her relationship with people close to her and the world at large.

Many of the songs, she said, were written over her years with bands, but it was after a particularly bleak and angst-ridden period of her life that she decided to shape them into a musical. Of this time she says: “For three weeks I couldn’t get out of bed, couldn’t speak to anyone.” It was during this period that she got the idea to make a play exploring her turbulent state of mind.

“People don’t want to talk about this stuff,” said Aphrodite. “I thought by putting it in the format of a musical it almost lures them into a false sense of security until they realise what the songs are about. I do feel like things are maybe changing a little but I know from experience there is still such a huge stigma attached when anyone even mentions depression.”

Aphrodite admitted exposing her own personal journey through depression in the play was “a bit like ripping my guts out” but said that exploring it through music, poetry and theatre was her way of breaking through the taboo, as well as being a way to accurately capture the fragility and erratic nature of the human mind going through depression. 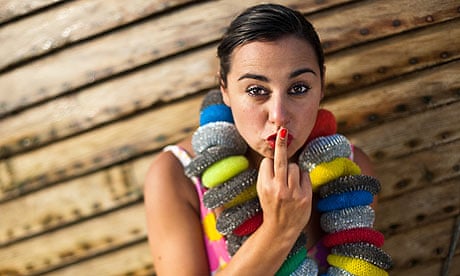 She said: “The thing is when you are going through this, it is isn’t funny, but when you can take a step back and look at the way you were experiencing the world and your relationships to people, it’s good to be able to laugh about it. We are never going to be able to talk about mental health and depression if we see it as this uncomfortable subject for everyone. Obviously the show is about depression at its core but I want this to be fun, to be joyous.”

Nigerian-born cabaret star Le Gateau Chocolat has also brought his highly autobiographical work, Black, to the fringe this year. It explores in raw detail issues surrounding his sexuality, weight and mental health – and, like Aphrodite, directly confronts the “black dog” of depression.

The show, told through both music and words taken from verbatim interviews between Le Gateau Chocolat and the show’s director, candidly discusses hisstruggle with depression and life as a gay drag queen after being brought up in a devout Christian household in Nigeria.

The din of the question of my ​​fatness, of the depression, permeates and never stops

“My depression has always been like a dial – sometimes its dialled down to two, other times it’s dialled right up to eight or nine, and when I’m in that state I’m incapacitated, I can’t do anything,” he said. “But it was in 2012 when a close friend of mine committed suicide … I knew then that I wanted to talk about it in my work and I want to make a dent in the taboo.”

He added: “What is really interesting for me is playing with that juxtaposition of people saying: ‘Oh, your life is fabulous and glamorous, you’re travelling around the world, you’re playing the Royal Opera House’ – when the truth of my reality is that when I’m performing, the din of the question of my fatness, of the depression that I feel beneath the surface, permeates and never stops.

“People project their reality on you – I almost feel guilty to be sad or be down or be depressed so even with people close to me I don’t feel like I can ever talk about it. So as gut wrenching and difficult as it was for me at the beginning, this show is part of me being able to accept my own depression, and get other people to confront the subject.”

An exploration of the toll that modern life can take on mental health is also at the heart of Garden, a play by Lucy Grace that explores the anxiety-inducing environment of corporate office culture and the benefits of offsetting that by connecting more with nature.

“I have suffered from anxiety most of my life but it does feel like modern life, particularly this soulless corporate culture where you sit in an oppressive office with no windows and are just a faceless cog in a machine, does put this mental strain on people,” she said. “I wanted to talk about that melancholy and that isolation in the play because otherwise there is this stigma, this idea you should just push those feelings away and just keep going.”

Giving the conversation around mental health a high profile platform has implications that reach beyond the realm of theatre. Over the course of the last parliament, it was reported that mental health budgets were cut by 8% and with large numbers going to A&E out of desperation for help with their depression. 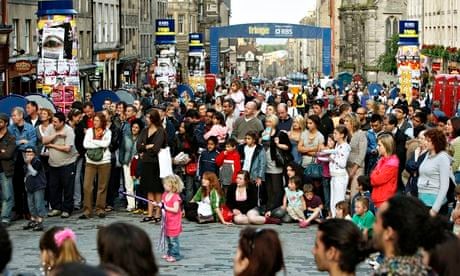 Many of those tackling the subject in their work at the Fringe said that unless the conversation around mental health loses its stigma, the devastating impact of cuts to mental health services would go unchallenged.

To ensure this opening up of the discussion around mental health is not simply a passing fad of this year’s fringe, performer Brian Lobel has worked with the Wellcome Trust on a project called Sick of the Fringe. It aims to create a community and a dialogue between performers who are exploring experiences of mental health and wider issues around health, disability and the human condition in their work.

The more these performances are talked about and championed, said Lobel, the more people will be emboldened to create new work that further erodes the taboo.

“Audiences do have still have an uncomfortable relationship with this topic,” said Lobel. “People are afraid of hearing stories with implications and actually stories about mental health do have implications. If you are going to build up sympathy and empathy for people with mental health, it makes it harder to cut budget for mental health services. The implications are that if you open up conversations with people who do not have perfect, immediate, convenient health needs there is an implicit responsibility to welcome them into your spaces and I think that is frightening for people and I think that is challenging and it is expensive.”

However, he said that the increasingly engaged responses to art speaking openly about taboo topics from depression to cancer proved there was an appetite for such works. Lobel added: “What these pieces show is that people – both performers and audiences – are hungry to talk.”

Women, Men and the Way We Write About Depression

A Great Way To Deal With Anxiety, Mindfulness