1. King’s birth name was Michael, not Martin.
The civil rights leader was born Michael King Jr. on January 15, 1929. In 1934, however, his father, a pastor at Atlanta’s Ebenezer Baptist Church, traveled to Germany and became inspired by the Protestant Reformation leader Martin Luther. As a result, King Sr. changed his own name as well as that of his 5-year-old son.

2. King entered college at the age of 15.
King was such a gifted student that he skipped grades nine and 12 before enrolling in 1944 at Morehouse College, the alma mater of his father and maternal grandfather. Although he was the son, grandson and great-grandson of Baptist ministers, King did not intend to follow the family vocation until Morehouse president Benjamin E. Mays, a noted theologian, convinced him otherwise. King was ordained before graduating college with a degree in sociology.

3. King received his doctorate in systematic theology.
After earning a divinity degree from Pennsylvania’s Crozer Theological Seminary, King attended graduate school at Boston University, where he received his Ph.D. degree in 1955. The title of his dissertation was “A Comparison of the Conceptions of God in the Thinking of Paul Tillich and Henry Nelson Wieman.”

4. King’s 'I Have a Dream' speech was not his first at the Lincoln Memorial.
Six years before his iconic oration at the March on Washington, King was among the civil rights leaders who spoke in the shadow of the Great Emancipator during the Prayer Pilgrimage for Freedom on May 17, 1957. Before a crowd estimated at between 15,000 and 30,000, King delivered his first national address on the topic of voting rights. His speech, in which he urged America to “give us the ballot,” drew strong reviews and positioned him at the forefront of the civil rights leadership. Dr. Martin Luther King Jr. giving his 'I Have a Dream' speech.

On August 28, 1963, in front of a crowd of nearly 250,000 people spread across the National Mall in Washington, D.C., the Baptist preacher and civil rights leader Rev. Dr. Martin Luther King, Jr. delivered his now-famous “I Have a Dream” speech from the steps of the Lincoln Memorial.

Organizers of the event, officially known as the March on Washington for Jobs and Freedom, had hoped 100,000 people would attend. In the end, more than twice that number flooded into the nation’s capital for the massive protest march, making it the largest demonstration in U.S. history to that date.

King’s “I Have a Dream” speech now stands out as one of the 20th century’s most unforgettable moments, but a few facts about it may still surprise you.

1.) There were initially no women included in the event.

Despite the central role that women like Rosa Parks, Ella Baker, Daisy Bates and others played in the civil rights movement, all the speakers at the March on Washington were men. But at the urging of Anna Hedgeman, the only woman on the planning committee, the organizers added a “Tribute to Negro Women Fighters for Freedom” to the program. Bates spoke briefly in the place of Myrlie Evers, widow of the murdered civil rights leader Medgar Evers, and Parks and several others were recognized and asked to take a bow. “We will sit-in and we will kneel-in and we will lie-in if necessary until every Negro in America can vote,” Bates said. “This we pledge to the women of America.”

2.) A white labor leader and a rabbi were among the 10 speakers on stage that day.

King was preceded by nine other speakers, notably including civil rights leaders like A. Philip Randolph and a young John Lewis, the future congressman from Georgia. The most prominent white speaker was Walter Reuther, head of the United Automobile Workers, a powerful labor union. The UAW helped fund the March on Washington, and Reuther would later march alongside King from Selma to Montgomery to protest for Black voting rights.

Joachim Prinz, the president of the American Jewish Congress, spoke directly before King. “A great people who had created a great civilization had become a nation of silent onlookers,” Prinz said of his experience as a rabbi in Berlin during the horrors perpetrated by Adolf Hitler’s Nazi regime. “America must not become a nation of onlookers. America must not remain silent.”

3.) King almost didn’t deliver what is now the most famous part of the speech.

King had debuted the phrase “I have a dream” in his speeches at least nine months before the March on Washington, and used it several times since then. His advisers discouraged him from using the same theme again, and he had apparently drafted a version of the speech that didn’t include it. But as he spoke that day, the gospel singer Mahalia Jackson prompted him to “Tell them about the dream, Martin.” Abandoning his prepared text, King improvised the rest of his speech, with electrifying results.

4.) The speech makes allusions to the Gettysburg Address, the Emancipation Proclamation, the Declaration of Independence, the U.S. Constitution, Shakespeare and the Bible.

“Five score years ago,” King began, referencing the opening of Abraham Lincoln’s Gettysburg Address as well as the Emancipation Proclamation, which had gone into effect in 1863. After 100 years, King noted, “the Negro is still not free,” and the rights promised in the Declaration of Independence and the Constitution were still denied to Black Americans. The image of “this sweltering summer of the Negro’s legitimate discontent” echoes the opening soliloquy in William Shakespeare’s Richard III (“Now is the winter of our discontent”), while the soaring end of the speech, with its repeated refrains of “Let freedom ring” calls on the 19th-century patriotic song "My Country 'Tis of Thee," written by Samuel Francis Smith.

Finally, King’s speech repeatedly draws on the Bible, including an allusion to the Book of Psalms (“Weeping may linger for the night, but joy comes with the morning”) and a quote from the Book of Isaiah (“Every valley shall be exalted, and every mountain and hill shall be made low...”), to name just two references.

All three major TV networks at the time (ABC, CBS and NBC) aired King’s speech, and though he was already a national figure by that time, it marked the first time many Americans — reportedly including President John F. Kennedy — had heard him deliver an entire speech. Kennedy was assassinated less than three months later, but his successor, Lyndon Johnson, would sign the Civil Rights Act of 1964 and the Voting Rights Act of 1965 into law, marking the most significant advances in civil rights legislation since Reconstruction.

6.) At the same time, the success of the speech attracted the attention (and suspicion) of the FBI.

Federal authorities monitored the March on Washington closely, fearing sedition and violence. Policing of the march turned into a military operation, codenamed Operation Steep Hill, with 19,000 troops put on standby in the D.C. suburbs to quell possible rioting (which didn’t happen). After the event, FBI official William Sullivan wrote that King’s “powerful, demagogic speech” meant that “we must mark him now...as the most dangerous Negro of the future in this Nation.”

At the FBI’s urging, Attorney General Robert Kennedy authorized the installation of wiretaps on King’s phone and those at the offices of his organization, the Southern Christian Leadership Conference (SCLC), ostensibly to look into potential communist ties. The FBI later stepped up its surveillance of King, which lasted until his assassination in 1968.

7.) The King family still owns the 'I Have a Dream' speech.

Though it is one of the most famous and widely celebrated speeches in U.S. history, the “I Have a Dream” speech is not in the public domain, but is protected by copyright—which is owned and enforced by King’s heirs. As reported in the Washington Post, King himself obtained the rights a month after he gave the speech, when he sued two companies selling unauthorized copies. Though some parts of the speech may be used lawfully without approval (for example, individual teachers have been able to use the speech in their classrooms), the King estate requires anyone who wants to air the speech to pay for that right.

Ninety-one years after his birth on Jan. 15, 1929, and 57 years after his historic “I Have a Dream” speech, Martin Luther King Jr.‘s stirring words and writings remain as relevant and inspiring today as they were when he lived.

Honor King’s lasting legacy by reading 55 of Martin Luther King Jr.’s best quotes—some you may have heard already and some you probably haven’t—but all of them worth repeating and contemplating as we celebrate equality, faith, and the profound truths of his message. From MLK quotes about peaceful protests to more, here are 55 MLK quotes.

1. “We must accept finite disappointment, but never lose infinite hope.”

3. “Forgiveness is not an occasional act. It is a permanent attitude.”

4. “I have decided to stick with love. Hate is too great a burden to bear.”

5. “Faith is taking the first step even when you don’t see the whole staircase.”

6. “Life’s most persistent and urgent question is, ‘What are you doing for others?'”

7. “Never succumb to the temptation of bitterness.”

8. “Our lives begin to end the day we become silent about things that matter.”

9. “We may have all come on different ships, but we’re in the same boat now.” 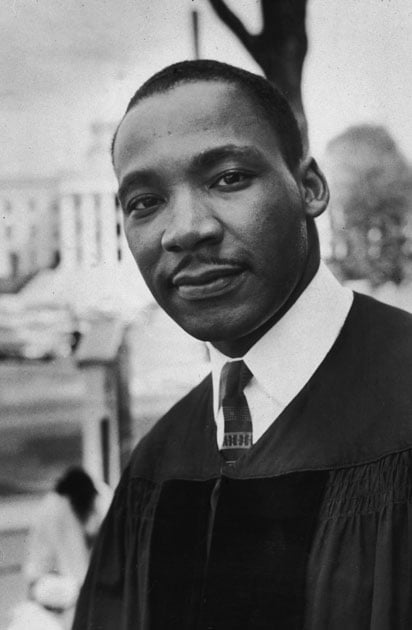